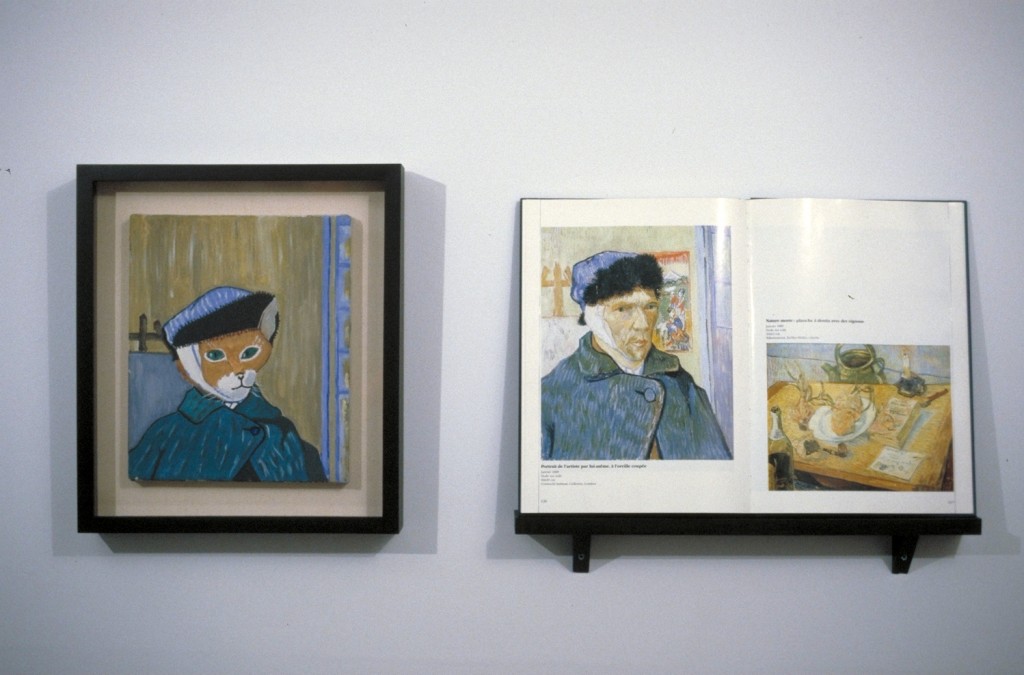 The installation Fuzzy Face by Nelson Henricks takes its departure from two paintings, both presented in the gallery: Van Gogh’s famous Self Portrait with Bandaged Ear – seen in the installation in a colour reproduction in a volume on Van Gogh’s work – and an amateur artist’s reproduction of that work, found by Henricks in a second hand shop. In the latter painting, the Van Gogh original is badly copied in minute detail but for a single, essential, encompassing shift: the artist as subject has been replaced by a cat. The accompanying video performance enters into an imagined point in the slippage in the interpretive moment by which the original self-portrait found its alternate cast.

In the video loop, Henricks, in close-up, his skin covered in a glossy, sticky substance, applies cotton balls methodically to his face. Over a period of some fifteen minutes, his appearance is gradually transformed into that of an animal of indeterminate species, occupying a curious threshold between stuffed animal and mythic beast. The gestures of applying hand to face continue throughout the tape, but at a midway point, the action begins in reverse – the cotton balls removed, the face returned to view in a second metamorphosis.

Fuzzy Face is, in the first instance, a reflection of the limits of language. There is an interval between an original and a copy in which interpretation finds its hold, represented in the amateur rendition of the Van Gogh and in turn enacted in Nelson’s own performance. The work is also a play on anthropomorphism, in which the desire to ascribe human identity to the animal world is here transfigured into a desire to be(come) animal – a theme that finds a broad appeal from myth to popular culture (the werewolf but one such instance). The work might also be read as a wry commentary on artistic metamorphosis, and a play of the motif of the artist-savage as a projection of our culture’s desire for primal embodiment. (Renee Baert)